Transformers are funny things. Those magnetic shunts are there to limit the power available to the magnetron. They add something called leakage inductance. It is as if you’ve added an inductor in series with the primary winding.

Remove the load and power it up, excess magnetic field causes the insufficient iron core to saturate, causing the inductance to go down, causing excess current and therefore a lot of heat. There are thermal switches on the transformer to protect against it burning up if the magnetron malfunctions. A fuse won’t do it, because the transformer is still drawing less current than when the magnetron is working, but all of the power is dissipating as heat in the transformer.

Note that if you will be using the transformer in such a way that it will =always= have a large load when powered up and running it for a short time, you do not really need to add turns to the primary, but then I’d strongly suggest leaving the magnetic shunts in place. For instance, if you are building a spot welder, you have a few turns on the secondary and you are shorting them out. Then the magnetic shunts limit the short circuit current so you won’t burn up wires or pop your house breaker. In that case, you should be applying voltage to the primary ONLY when the electrodes are firmly in place on the metal being spot welded and ONLY for a short time. 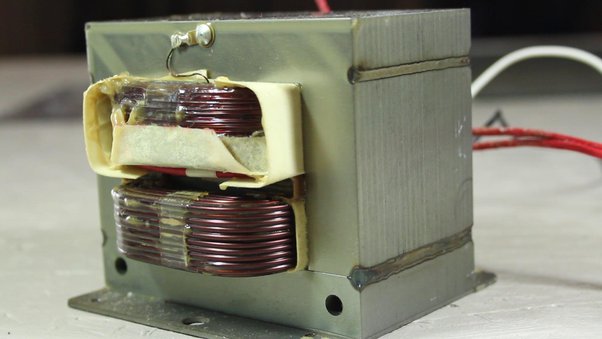 If you look carefully between the windings, you can see several layers of grey metal. Those are the magnetic shunts. 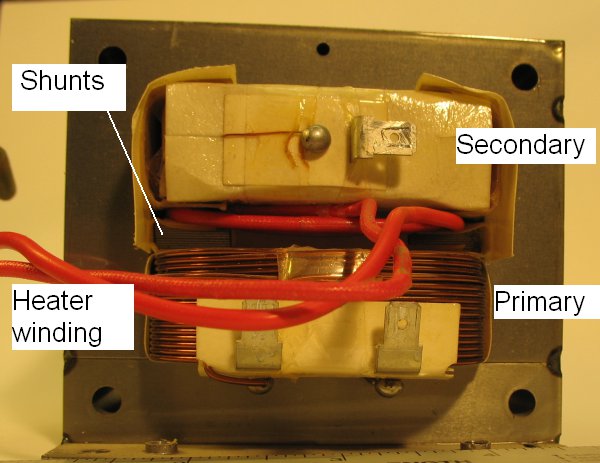 To use as a more conventional power supply transformer, you must do a bit more than just replace the secondary. You can remove the shunts, then you must add more windings to the primary so the iron core doesn’t go into saturation when not under full load. They don’t have to go over the primary winding, but there is no reason not to if they’ll fit without damaging the wire.

Here, the shunts are being removed after a different secondary had been added. You can see the layers of steel in the shunts. 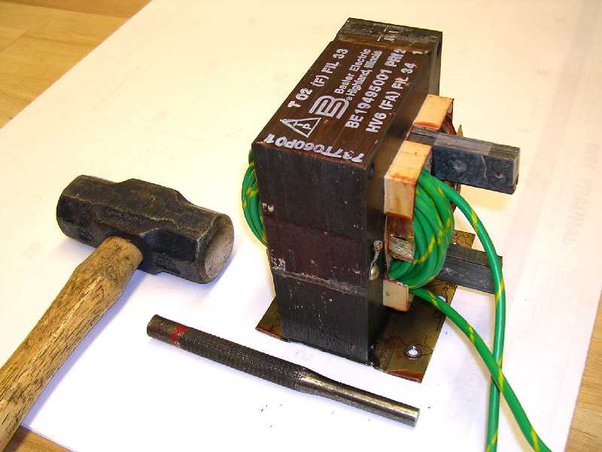 Here is one with the extra windings (white wire) wound over the primary and where the magnetic shunts used to be and the green/yellow wires are the new secondary: 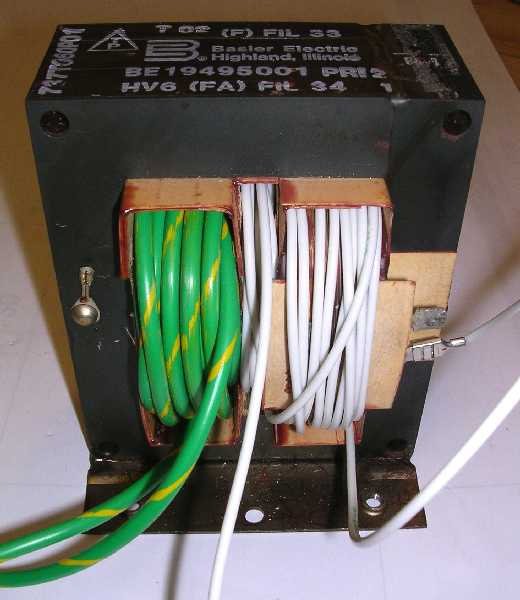 It would be MUCH easier to find the inflection point with a variac, aka a variable transformer. Then you can monitor the current draw (no load) as you increase the voltage into the primary. 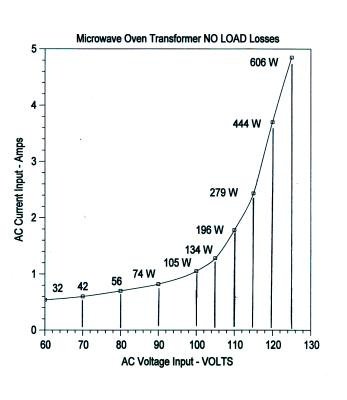 You are looking for that inflection point where the current/power draw starts going up steeply. The desired end result is to not go above that point. So on the above chart, let’s call it at 100V. Now we need to find out how many extra turns we need to add so that the original primary has no more than 100V with 120V line voltage coming in.

Wrap 10 turns around, fire up the variac and bring it to 100V again. Measure the AC voltage on the 10 turns. That is your voltage per 10 turns, divide by 10 to get volts per turn. You want 20V, since the incoming voltage is 120V.

Calculate how many turns you need, add them, and put them in series with the primary. Connect the variac up again, and confirm that the inflection point is now at or above 120V. If you find the current going up more than before when bringing the variac up, you have the phasing wrong. Just reverse the new winding hookup and try again. It does not hurt to put a few more windings and go lower on the loss scale.

After you have the extra primary windings installed to your satisfaction. add 10 windings as a temporary secondary, measure, divide by 10 to get the volts per turn. Now just divide the desired output voltage by the volts-per-turn to get the number of windings needed. Use the largest wire that will fit that number of windings in the space available, as the size of wire limits the current and therefore power.

Since this is relatively low voltage, thinner insulation is better, but make sure all sharp edges of the transformer core are covered. I strongly suggest using stranded wire, as large solid wire is just too hard to bend and you’ll never thread more than one turn through with solid wire.

I strongly suggest using the thermal switch that was on the transformer when it was in the microwave as a safety feature. 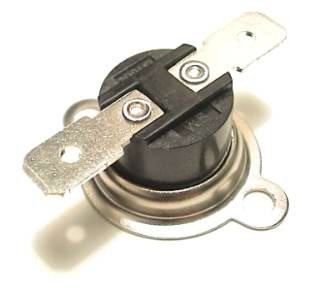 And as with any circuit, a fuse is a good idea. All wiring must be able to withstand in excess of the fuse rating for an indefinite period of time. The maximum expected current draw should be about 80% of the fuse rating.

Edit: Another method of doing this without adding primary windings when you have two microwave oven transformers of the same capacity:

Wire the primary windings of the two separate transformers in series. In this way, both transformers have 1/2 of the line voltage and so should be well below the current inflection point, well below saturation with no load.

To keep the load on each transformer as equal as possible, wind the same number of secondary turns, and wire them in series with each other. With turns the same, in series the current is the same, so the load will be the same. This is also a handy way to get a virtual centertapped transformer, which with a full bridge rectifier can give you equal positive and negative polarity sources. Great if you are building a custom audio amp, or a variable power supply for circuit testing.

Originally posted as Steven J Greenfield's answer to What is the purpose of the magnetic shunt that is in most microwave power transformers? Can the shunt be safely removed when winding a single replacement secondary?

Posted by Steve Greenfield at 11:14 AM