It was wonderful! The Amiga could multitask like no other consumer computer.

I had a digital photography business using an Amiga for photo compositing (like Photoshop), 3D rendering, special effects, and desktop publishing. My now rather old website is still online. Not up to today's standards, I know, but we did these compositions live while the customer waited, something you really could not do on a Windows computer in 1995:
Polymorph Digital Photography- Digital Portrait Photos and Composites

It had a 68060, which was a Motorola RISC processor, running at 50MHz with 128MB of RAM. We'd take it to science fiction conventions where we'd take pictures of people in their costumes and composite them into scenes and deliver the prints a bit later that day.

I ran a program called Directory Opus, or DOpus for short, as a Workbench replacement. It made the Amiga operating system, Workbench, even more of a joy to use.

I would typically have an image processing program called ImageFX running with between 6 and 20 layers, with the previous image printing on an inkjet (which at the time took 15 minutes to print an 8x10 photo), with a 3D modeling/rendering program called Real3D rendering things to composite into the image, and a Mac emulator running with the software for the tethered SCSI camera and the software to access Corel stock images CDs. All running at the same time.

The first convention we sold our services at was Norwescon, and 6 separate times over the weekend while chatting with different Microsoft programmers, they'd burst out with "Bill Gates ruined software" from watching all I was doing.

And while all this was going on, the printer did not stutter. My mouse did not freeze or stutter. Drawing selections and such in ImageFX was smooth, even with all that stuff going on at the same time....

When we had the equipment back home (home office, then shared space inside a sci fi collectibles store), I'd also have my web browser running with a dozen or so tabs open at the same time, often while running the Mac emulator and printing to a dye sub printer while making coffee cup prints, and running ImageFX, Real3D, and a desktop publishing program whose name escapes me.

And the mouse was so smooth... no hesitations. Typing was smooth. I could have Real3D rendering several high resolution images (2400x3000 pixels) while printing, -and- start other programs with no perceptible effect.

Nothing like Windows. I also owned a Windows 3.1 computer, and then a Windows 95 system so that I could run Pagemaker (desktop publishing). Even when using a Pentium 333MHz, Windows 95 stunk. I could not render in 3D and do anything else. If it was printing to the inkjet or rendering in 3D, I could -not- start another program without the whole thing becoming nonresponsive for several minutes, during which printing and/or rendering would stop and both the mouse and keyboard would stop responding.

In Windows 95, even if I started Pagemaker before beginning to print or render, typing or using the mouse would become a nightmare.

It wasn't until PCs started to get well over 1GHz clock speed before the interface started to feel as smooth as that 50MHz Amiga.

PCs are now really stinking fast, with more RAM than all the hard drives I had connected to my Amiga 3000. If only Commodore hadn't been gutted by Medhi Ali and Irving Gould, who knows what we'd have now?

Funny thing- it is not the hardware. I still have an old Pentium 200MMX with Windows 95 on it. It even has the same graphic chip on the video card that my Amiga had. But it stinks on ice. Slow, jerky... but I also have an Amiga emulator, Amiga Forever, running on it. Windows 95 stinks at multitasking, but it sees Amiga Forever as a single task. So within the Amiga emulator, it runs like the fastest Amiga ever!

I upgrade my Amiga Forever version every few years, and I still have the hard drive image from my now-defunct Amiga 3000. Once in a while I start it up and play around in it, and remember...

We even had a 3 page article done about my business in Amiga Format in 1998: 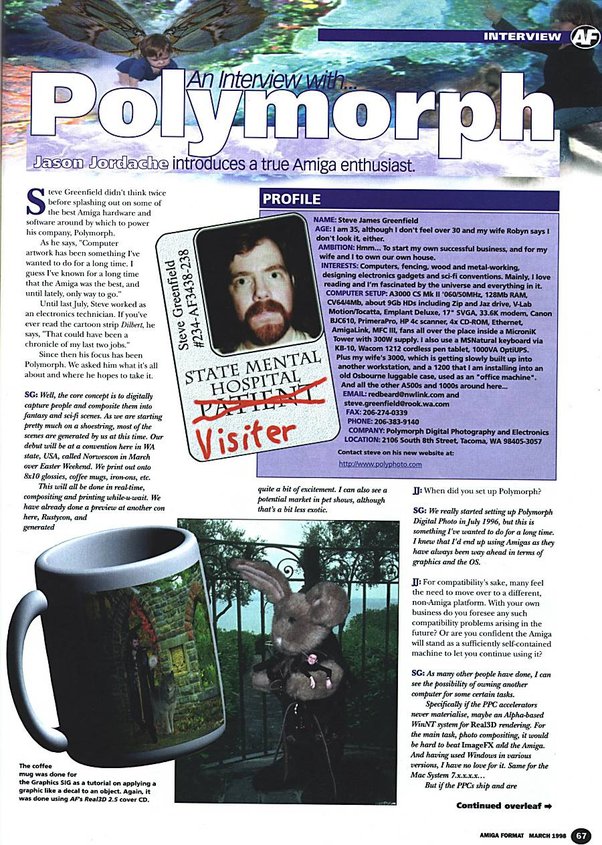 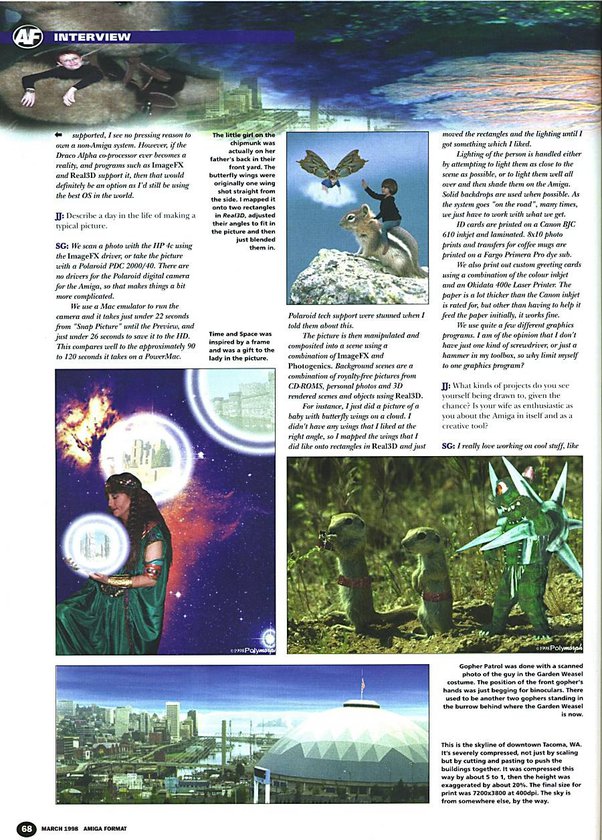 Posted by Steve Greenfield at 8:43 AM